One of the best films of 2009 was Duncan Jones’ debut Moon, not least because it featured some high quality physical model-work. I’ve already built the SRS kit of the Lunar Rover, but now a kit of Gerty the computer is also available from Steve Howarth, the model shop supervisor on the film, and builder of the original props!
This is a 1/6th scale exact replica and comes in 24 resin pieces, as well as some LED assemblies for the strip lights, Gerty’s eye and a backlight panel for the main screen. To complement this there is a selection emoticons colour printed on acetate to insert into the screen to bring Gerty to life. There is also some brass wire and foil for extra detailing, some printed Post-It notes as seen in the film and finally a comprehensive set of decals – of which there is 3 copies of each to cover any mistakes in application.
The resin is of good quality generally but there were quite a number of pinholes that needed filling, particularly on some of the edges. Filling is fairly straightforward but did take quite a while in the end to get them all. It’s sometimes easier to drill out a tiny bubble with a 1mm bit just so you’ve got something a bit larger to squish the putty into. 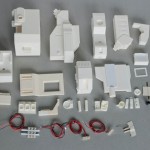 It would normally be quite a straightforward build – fit of the parts is good and can be painted beforehand in most cases, but I decided to go a little bit further and try and replace the screen with a fully functional OLED one, driven by a microcontroller and able to show the full range of Gerty’s emoticons.
The kit screen is almost exactly the same side as a 0.96″ colour OLED device available from Digole.com – the active area is just marginally smaller, but it’s good enough. The biggest problem is that it comes attached to a larger PCB containing the display controller which means it’s not going to be a drop-in solution and some surgery will be required to get it into place. I think I will need to completely remake the surround & shade from scratch to accommodate it, but this should be a relatively simple job in plasticard.
The display controller communicates over a serial interface which means it’s very simple to connect to a micro controller. It has a resolution of 96×64 pixels with a 65k colour depth – not huge but even at this size, the data for just one emoticon would nearly fill the available flash memory of the microcontroller. I want to have all 11 emoticons available, plus a “boot” screen so additional off-chip storage in the form of a micro-SD adapter is also required. Luckily this uses the same serial interface so again connectivity is kept simple. 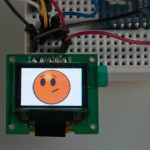 There’s plenty of room inside the main body behind the screen for all the electronics, but probably not the batteries too. This probably isn’t too much of a problem as Gerty is designed to be suspended from above, so will need some sort of corridor section to hold her (him?) anyway which will probably give ample battery storage space.